Wetzel’s crafts various formats to take ‘pretzels to the people’ 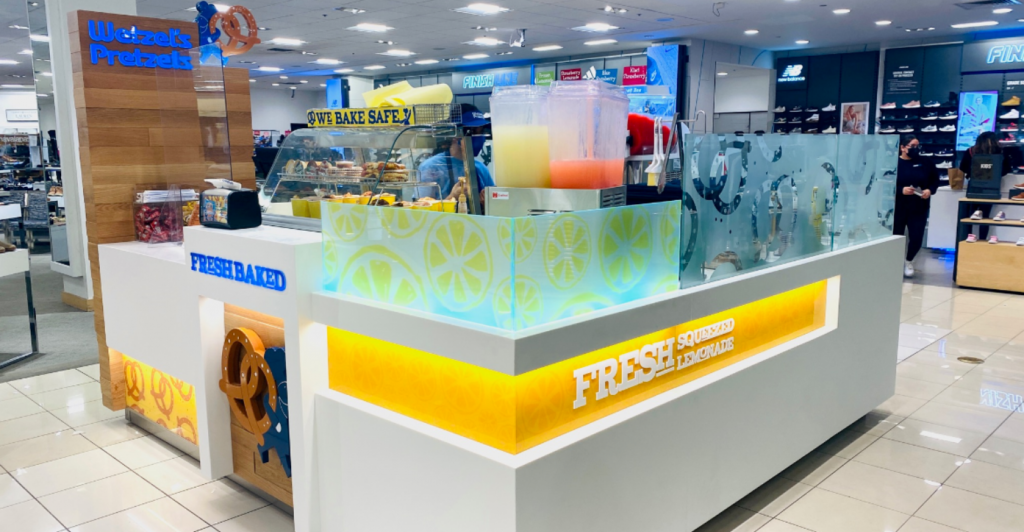 Wetzel’s Pretzels is crafting plans for a stand-alone Twisted by Wetzel’s large format unit as it continues to offer a portfolio of sizes that range from kiosks in department stores and convenience stores to food trucks.

Jennifer Schuler, CEO of Pasadena, Calif.-based Wetzel’s, shared her brand’s multiple strategies for “Unlocking Growth Through Flexible Store Footprints” in a CREATE Live session on Wednesday. The session, which is available on demand, was sponsored by Radar.

“We jokingly call it taking pretzels to the people,” Schuler said, adding that the company is intent on taking pretzels and lemonade to “people where they might want to have that kind of snack.”

Wetzel’s is dedicated to offering flexible formats “to enable people access to a product in a brand they love,” Schuler said.

Wetzel’s, a 28-year-old brand, current has 350 units, ranging from traditional mall food court formats to newer a 10-by-10-foot kiosk in a Macy’s department store in the South Coast Plaza in Costa Mesa, Calif.

The success of the Macy’s kiosk unit has led the department store to consider additional outlets in Macy’s Union Square in San Francisco and in New York.

The new units appeal to “consumers who are changing the way they eat,” said Schuler, adding that they are gravitating toward “on-the-go mini meals.”

That change in consumer behavior has led the company to think bigger, she said.

“We’re working on launching a new format called Twisted by Wetzel’s, which will be a street-based format,” Schuler said. “We’ll start here in California, where the brand was born and raised, and we have strong franchise space.” The menu, which is in development, would feature some more substantial items such as loaded pretzel bits and proteins.

“It’s a full menu expansion using pretzels as the centerpiece,” she added, “but twisting it into all kinds of new forms and flavors that second-generation customers of the brand will really delight in and that we can put in both street locations or that we can put adjacent to college and universities.”

Schuler, who said the company is still negotiating leases, should have two of the Twisted units open “by the end of this year or early next year.”

The pandemic appears to have accelerated a trend toward snacking, Schuler added, and is linked to the varied formats.

“What I’ve seen is this huge shift in the way consumers have been eating,” she noted. “In the last decade, they’ve tripled the amount of snacking. So what that means is you’re seeing fewer consumers eating three meals with a small snack. Millennials and Gen Z replaced meals with snacks, and they use them as mini meals.”

That has given Wetzel’s Pretzels a tailwind, she added, and same-store sales have increased as must as 20% or 30%.

Macy’s has also looked at ways it can add kiosks to its stores. The first South Coast Plaza unit “decoupled the baking from the point of sale, so we have a very tight, very compact format,” Schuler said.

To accommodate the smaller unit, Schuler said the brand relied on its simple menu.

“This brand has always been about simplicity,” she said. “We’re about pretzels, dogs, lemonade. When you maintain the simplicity, it gives you a lot of room for creativity.”

Schuler said the development team has also fleshed out its food truck offerings, relying on the same small footprint.

“When you’re doing a store-within-a-store model, you’re operating in someone else’s home. You’re a guest in their home, and so it’s really critical for us to operate at the Macy’s standard,” she said. “Luckily for Wetzel’s, we’ve had experience with that. We operate at Disneyland and Disney World and have done so for about 18 years.”

No matter the size, Wetzel’s looks at real estate that can produce top-line sales, Schuler said.

“It’s making sure that we have the right return on investment for the franchisees,” Schuler said, getting “a good ROI on the cost of that equipment and on the footprint.”

Wetzel’s Pretzels will also continue its partnership with companies like Walmart and convenience store brands like Extra Mile and Phillips 66, she said.

Grab your piece of the pretzel.

We’re glad you’re interested in putting success right at your fingertips. Start by completing the form and our development team will contact you.

*Positive sales growth every year excluding Mar-Aug 2020 due to temporary closures of locations. As stated in Item 19 of the FDD. See 2022 FDD for additional details.